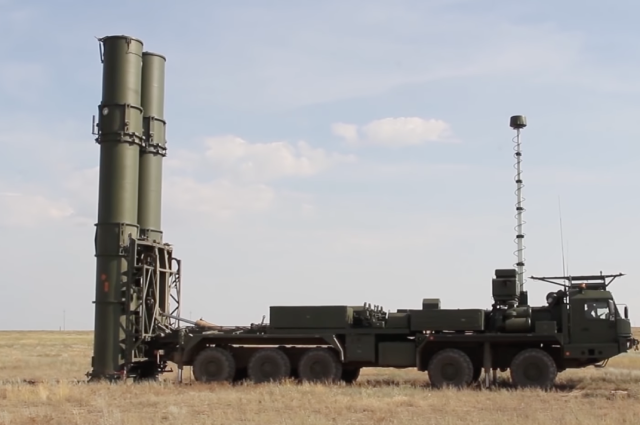 The first brigade set of the S-500 air defense system “Prometheus” will be delivered to the troops in the near future, the first systems will be received by the 15th Special Purpose Army of the Aerospace Forces of Russia, covering Moscow and the Central Industrial District. This was reported by a source close to the military department. The composition of the kit and the exact time of the transfer of the new system are not specified, there is also no official information on this account.

The first brigade set of the S-500 air defense system entered the armament of the unit on combat duty for the protection and defense of the airspace over Moscow. According to experts, it will work in conjunction with the A-135 Amur missile defense systems, which will create an effective anti-missile umbrella over the capital. Earlier it was reported that the S-500 is going to be integrated into a single network with the S-300VM4 «Antey-2500 » and  S-400 «tRiumph », and  also the S-350 «Knight ».

The second C-500 brigade set will be handed over to the troops in the first half of 2022. Further deliveries of the complex will continue in accordance with a multi-year contract.

On September 16, Deputy Prime Minister Yuri Borisov reported that the S-500 Prometheus air defense system began to be delivered to Russian troops after the completion of state tests. According to him, the deliveries of the complex did not begin in the full nomenclature. The start of serial deliveries of the S-500 is planned for 2025.

This year, the complex successfully completed state tests, which took place in the shortest possible time. The last test launches were conducted on July 20 at the Kapustin Yar test site. They included live firing at a high-speed ballistic target. The military department reported that the shooting was successful and the defeat of the target was confirmed. During these tests, the system was shown for the first time on video, an outgoing rocket was demonstrated from afar.

It was also reported that 4 years ago, the Ministry of Defense launched a training program for specialists to work with new weapons. The training of the first specialists is carried out at the Military Academy of Aerospace Defense named after G.K.Zhukov, and also at the Yaroslavl Higher Military School of Air Defense. Also training of officersIt is organized on the basis of the military training centers of the Siberian and Southern Federal Universities and the Bauman Moscow State Technical University. The soldiers for the S-500 complexes are being trained at the base of the Anti-Aircraft Missile Forces Training Center in Gatchina. Engineers for operation are trained in a number of educational institutions of the Ministry of Defense of the engineering profile.

The military department claims that the S-500 anti-aircraft missile system has no analogues in the world. For example, in terms of its characteristics, the S-500 will be significantly superior to the S-400 and its American competitor Patriot Advanced Capability.3. The S-500 “Prometheus” (OCD “tRiumphator-M”) belongs to the new generation of ground-to-air air defense systems.

The concept of the fifth-generation air defense system originated with the NGO ALMAZ back in 2002. In 2011, we developed its preliminary design. Recall that the S-500 “Prometheus” (ROC “tRiumphator-M”) belongs to a new generation of ground-to-air systems and is a universal long-range and high-altitude interception complex with an increased missile defense potential. The radius of destruction of the S-500 is about 600 kilometers.

The S-500 air defense system consists of two segments: one is designed for missile defense, the second for air defense. In fact, these are two complexes combined under one management. Each of them has its own missile armament and hardware. The system is capable of detecting and simultaneously destroying up to ten ballistic supersonic targets.The promising system is also capable of hitting aerodynamic targets (airplanes, helicopters, other aerial targets) and cruise missiles. It can also hit hypersonic missile warheads. Due to the ability of the S-500 to work on targets in near space, it is referred to the first generation of anti-space defense systems.